Your Source for All The Latest at IHDI 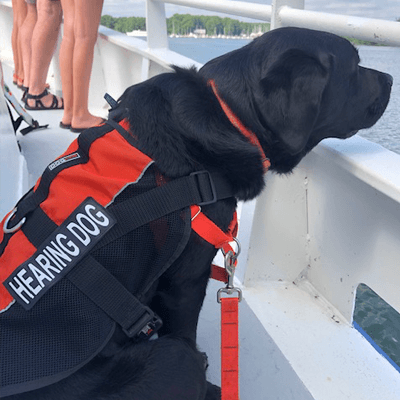 Last August, IHDI trainer Jack drove all the way from Boulder to the Blue Ridge Mountains of Virginia to unite Hearing Dog Henson and Janet. Jack spent four intensive days training Janet to Henson’s response cues to door knocks, smoke detectors, and iPhone alarms, as well as specialized alert responses tailored to her needs: vocal calls from help from her family and oncoming traffic alerts for daily walks and runs together.

While Henson arrived as a skilled hearing companion dog, he'd not yet achieved his Public Access certification. With the assistance of the IHDI team and Janet's goddaughter, who had previously prepared service dogs for Public Access testing, Henson and Janet were the first IHDI team to test virtually in January 2022. It took two phone batteries, three assistants, a smiling Target staff, and the extreme patience of the IHDI team for Henson and Janet to test through eighty points of commands and responses. Janet and Henson were delighted to pass the test and become a fully vested team who could now travel together on public transportation to grocery stores and doctors’ offices. Henson’s favorite place is the local public library. He displays his impeccable sweetness and excellent training in every public situation. Airbnb has commended Henson as a ‘model guest.’

Janet shares, "Henson provides me with safety and confidence as I navigate the world with 80% hearing loss. But perhaps as importantly, Henson is a beautiful, skilled ambassador for the ‘invisible disability’ of deafness/hearing loss – and a gentle reminder of the necessity of full inclusion and acceptance for all."

How did Janet and Henson celebrate a year of being a dynamic team? A ferry ride. "Henson’s active nose loved all the new sea smells, and he behaved perfectly on the ferry. Thanks and love to you all for a great first year of partnership with IHDI and Henson!"

Happy Anniversary to Janet and Henson from IHDI!