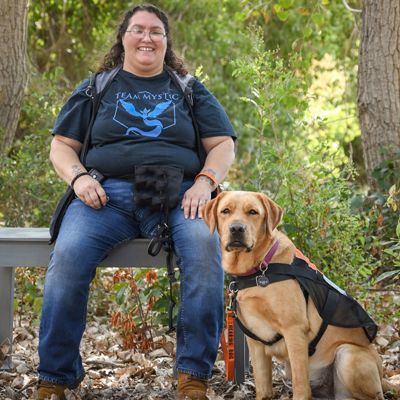 Ruth has had hearing loss since she was a baby, which progressed to being deaf by young adulthood. Ruth has an independent spirit and a great deal of perseverance. She, and her “wonderful Marine” husband, have raised three children. In keeping with her independent spirit, Ruth taught herself American Sign Language. However, Ruth rarely gets to connect with another deaf person in her rural mountain community, with the closest deaf resources being hours away. Ruth sought out International Hearing Dog’s services because she wanted a dog to alert her to everyday sounds which she could not hear – like  a wake-up alarm, smoke alarms, oven and household appliances’ buzzers; and people knocking on her front door. Ruth felt that being notified of these sounds would help open up her world. Also, Ruth, who has slept through smoke alarm tests in her apartment building, also felt that a dog alerting for her would help bring her a greater sense of security and peace. Further, because Ruth had often experienced discrimination and anger from individuals who thought Ruth was ignoring them and did not realize Ruth could simply not hear them, being accompanied by a Hearing Dog wearing an orange Hearing Dog vest would help others realize that Ruth was not ignoring anyone, but rather she could not hear them. Ruth’s hopes when applying for a Hearing Dog were that a Hearing Dog would help her integrate better into society - that her dog would be a bridge to the hearing world…

Creating that bridge, and bringing a sense of safety, and independence into Ruth's world is Hearing Dog, Grayson!

Grayson has improved my life greatly. I am so thankful to have him. I can’t imagine ever being without him now...Having him alert me [to sounds] is amazing.  — Ruth